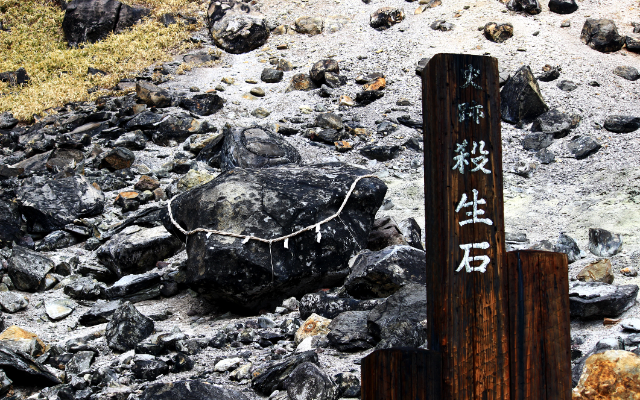 With everything going on in the world, this is NOT what we needed right now:  There’s a boulder in Japan called the “Killing Stone” that’s six feet tall and 26 feet around.  According to legend, there’s been a DEMON trapped inside it for 900 years. But maybe not anymore . . . because the stone SPLIT IN HALF earlier this month.

As legend has it, an evil nine-tailed fox took the form of a beautiful woman in the 12th century, and tried to overthrow the emperor.  But a warrior killed her, and her spirit got imprisoned in the rock.

Now some people are worried her spirit is free, and she’s going to wreak havoc on everyone.  But there’s also a chance it’s GOOD news… Another version of the legend says freeing her spirit might actually be a GREAT thing, and will help heal the world.  So hopefully that version is true.

Local officials started seeing cracks in the boulder a few years ago.  They think rainwater got in and froze, and that’s what finally broke it in two.

Now they’re trying to decide what to do with it.  Some people want them to cement the two halves back together.  Others think they should just leave it as is.

That second option might be the safer call, since the rock supposedly kills anyone who touches it.

2 days ago
Connect With Us Listen To Us On