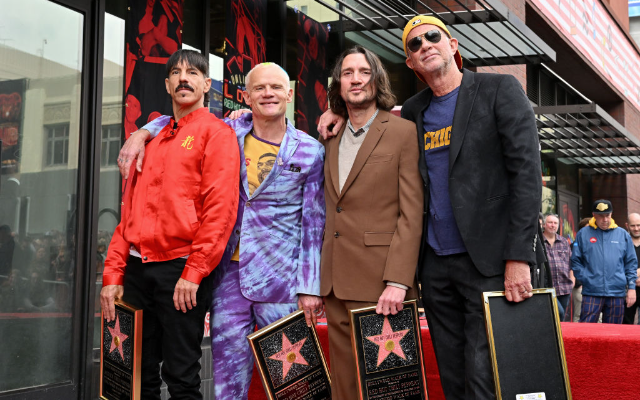 The Red Hot Chili Peppers were honored yesterday with a star on the Hollywood Walk of Fame.  There was such a huge crowd that Hollywood Boulevard had to be shut down.

They had a few guest speakers:  Musician and recovery advocate Bob Forrest, funk musician George Clinton, and Woody Harrelson.  Each member got to speak, and Chad Smith even gave a shoutout to the late Taylor Hawkins.

The USC marching band was also there to perform covers, and got FLEA to dance to their rendition of “Can’t Stop”.

After their star was unveiled Anthony Kiedis went in for a quick LICK.  But what might be more surprising is how they were all fully clothed

“To our fans we love you forever.”

Flea later wrote in a post, quote, “Grew up skulking and cavorting round every little crack and crevice of this street.  Thoughout all my worldwide wandering this place has always been a part of me and now we are a part of it.  The filth, the pathos, the beauty and the hope.  All of it.

6 hours ago
Connect With Us Listen To Us On